In addition to the principal voice cast fans have come to expect from the animated series and features (Frank Welker as Fred and Scooby Doo, Grey Delisle as Daphne, and Mindy Cohn as Velma), I have a source confirming some of the supporting cast for this new D2V title: Tara Strong, Phil LaMarr and Lauren Tom. Scott Menville was also mentioned, which leads me to believe that Menville will be reprising his role as Shaggy rather than Matthew Lillard who voiced Shaggy for the February 2010 DVD release, Scooby-Doo! Abracadabra-Doo. [Menville also voiced Shaggy for the previous TV series, Shaggy & Scooby-Doo: Get a Clue!]

My source added that they were putting the “finishing touches” on recording.

The press release also mentions that the new animated TV series, Scooby-Doo! Mystery Incorporated will air in 2011. However, since I first published this article here I now have two sources confirming that the series will air summer 2010, possibly in July, and that the 2011 date mentioned in the press release is believed to be for international markets.

A preview of the new series is scheduled to air Monday, April 5th at 7:00 PM (EST) on Cartoon Network, and it’s been given a full 30-minute time-slot on the CartoonNetwork.com Schedule.

The voice cast for Mystery Inc. includes Welker, DeLisle, Cohn and Lillard (whom I’ve confirmed through a fellow cast member that Lillard will voice Shaggy for the new series).

Additionally, David Kaye (voice of Megatron in five Transformers series to date) shared news that he had a recording session April 1st for an episode of Mystery Inc. with the aforementioned Welker and DeLisle, as well as fellow guest stars Cree Summer and Maurice LaMarche. Kaye added that he got to deliver one of the most famous lines of the Scoobyverse.

And as an exclusive for the blog, Kaye graciously granted permission to share the photos from the recording session: 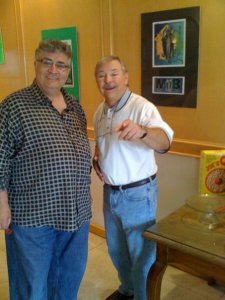 And on a related Scooby note, I neglected to mention the February 16th release of Scooby Doo: Abracadabra-Doo in my VAs on DVD coverage earlier this year, but it’s worth the rental. It’s been well-received by fans (click here comments via Scoobyfan.net) and it also received positive reviews (toonzone called it “an uncommonly good Scooby-Doo movie”) due to its return-to-roots retro look and feel as well as some of best 2D animation Warner Bros Animation has produced for a Scooby feature since Scooby Doo on Zombie Island (1998).

Overall, it’s also one of the most entertaining Scooby features released in the last decade (or more). It just seems like more attention was given to producing a quality product which appealed both to kids and nostalgic Scooby Doo fans. For starters, it’s directed by Spike Brandt (Duck Dodgers, Animaniacs), and both Alan Burnett and Paul Dini — two of animation’s top writers — were involved in developing/writing the story and teleplay.

Wikipedia also mentions a Scooby-Doo and the Wild West Frankenstein animated D2V feature for 2011, but I have been unable to find any sources confirming this title. And according to a post on ScoobyAddicts.com, there was a Wikipedia entry in October 2009 which listed this title as Scooby Doo and the Wild West Boogeyman. The listing was removed less than a week later.

A very special thanks to David Kaye — DavidKaye.com for the photos.